Now it’s time to take a closer look at the different types of project organizations. What do I mean by “project organization”? I particularly don’t find this term very intuitive, but since it is widely used, we will stick to it. In its essence, it transmits the idea of the “degree to which an organization is project oriented”. Seems a bit easier to understand, no? A company can present almost no traces of project orientation, or it can be entirely project oriented. These are the two extremes, and they form the boundaries of a continuum that contains mixed types in between. So let’s see in more details the two borders of such continuum. 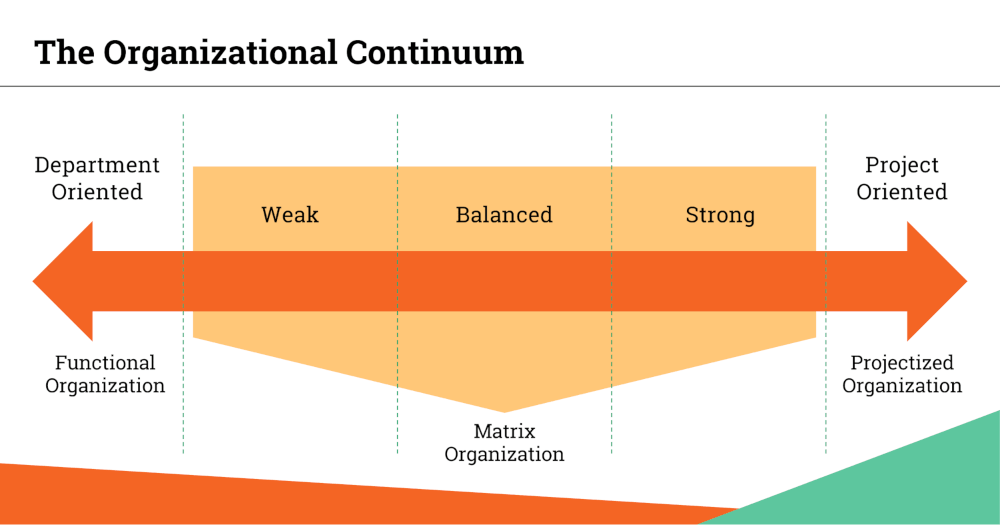 This type of organization is structured in functional sectors (Marketing, Sales, Production, etc.), and there is little to no project management. Each sector is involved in its own activities (there might even be projects within the sectors), and interdepartmental projects are considerably rare (although they might exist). The figure of a project manager is not present: if a big project that involves more than one functions comes in, each manager of each group oversees their part of the project. There is no such thing as a project team, and each “member” of the project task force might not even be aware that there is a project going on. In fact, there’s probably limited conversation between team members (because they do not know they are a team) and probably there are no project team meetings.

The functional organization works very well for groups which do not run many projects or for projects which are not complicated and not on a tight deadline.

Before talking about what lies in between the extremes of our continuum, let’s jump to the other side and visit what we call a “projectized organization”. Here, the project manager is king or queen. The team is dedicated, works on this one project, and the project manager acts as the manager of the team, possibly even writing performance appraisals. Basically everything goes around the project being implemented. The project is broken down into different areas, each one under the attention of a project member or a group of members.

Projectized organizations are good for a very critical project, especially if time is of the essence. Since all team members are entirely dedicated to one single project, this type of organization is more expensive. There is really a time and a place for each of the project organizations. And in fact you’ll find that some companies may use a combination of all or some depending on the project at hand.

And finally… The middle! Matrix organizations mix several components of both functional and projectized organizations. Therefore, there are different types of matrix organizations. We will cover three here: weak, balanced, and strong. The designation of weak, balanced, or strong has to do with who has more power or control over the project: the functional manager or the project manager. Keep in mind that a functional manager is someone who has a responsibility over a specific area and doesn’t typically run projects, while the project manager is exactly the opposite. 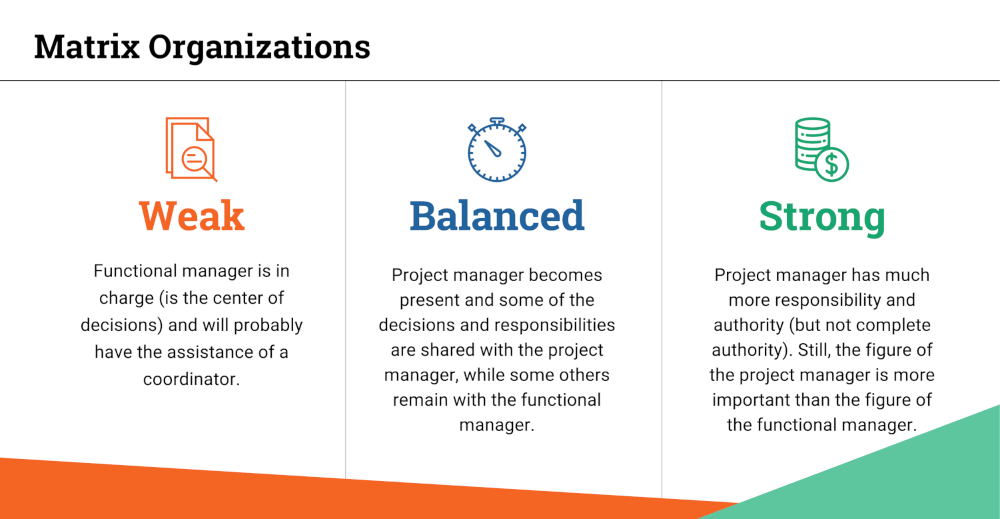 In a balanced matrix, the figure of a project manager becomes present. The project manager’s presence is recognized as helpful to the success of the project. Therefore, some of the decisions and responsibilities are shared with the project manager, while some others remain with the functional manager. The project manager manages the team to stay within scope, schedule, and budget. Another characteristic of a balanced matrix is a rising multitasking scenario: team members in a specific sector might also work for specific projects. As a consequence, the functional manager figure is still relevant and it makes decisions concerning who does the work and how that work is to be accomplished.

Which One Is Better?

Matrix organizations are good when the workers are assigned to a mix between several projects and other functional work.

But among the weak, balanced and strong matrix organization, which one is the best? Well… From a project management perspective, the strong matrix is better (because, well… it prioritizes projects), but that is not absolute. The important thing to keep in mind is the nature of the organization and of the projects. Maybe you just run small projects that don’t require much attention or dedication, and the functional manager just needs some advice regarding how to organize the efforts in a more efficient way.. In this case, a weak matrix organization can be the best fit. A balanced matrix works well when it’s easy to divide decision making and responsibility between the project manager and the functional manager. If it makes sense for the project manager to have more of the authority and the decision making, then a strong matrix can be the best choice.